The Portsmouth Naval Shipyard pumped over a billion dollars into the regional economy last year, and businesses in southern Maine benefited from hundreds of millions of dollars in the salaries of residents who work at the yard.

A report by the Seacoast Shipyard Association estimated the economic impact of the Kittery shipyard at $1.3 billion, which represents a 37% increase from $948 million the year before. Most of the increase, the group said, can be traced to greater spending on contracts, which rose from $87.3 million in 2020 to $469.4 million last year, reflecting construction of a $1.7 billion dry dock that got underway.

The project will take seven years to complete and will double the size of the shipyard’s existing dry dock, which is used primarily to repair, maintain and modernize Navy submarines.

The Shipyard Association is a group that seeks to foster community support for the continued operation of Portsmouth Naval Shipyard and boost its economic impact on southern Maine and New Hampshire.  The Seacoast Shipyard Association’s formula for calculating the shipyard’s economic impact is a tally of civilian employee payroll, military payroll, the cost of purchased good and services, and contracted services. 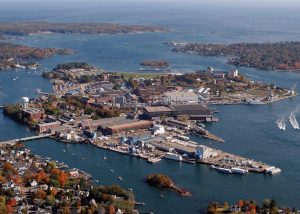 Governor on Primary Day in NH

All Electronic Tolls on Spaulding Turnpike Getting Closer